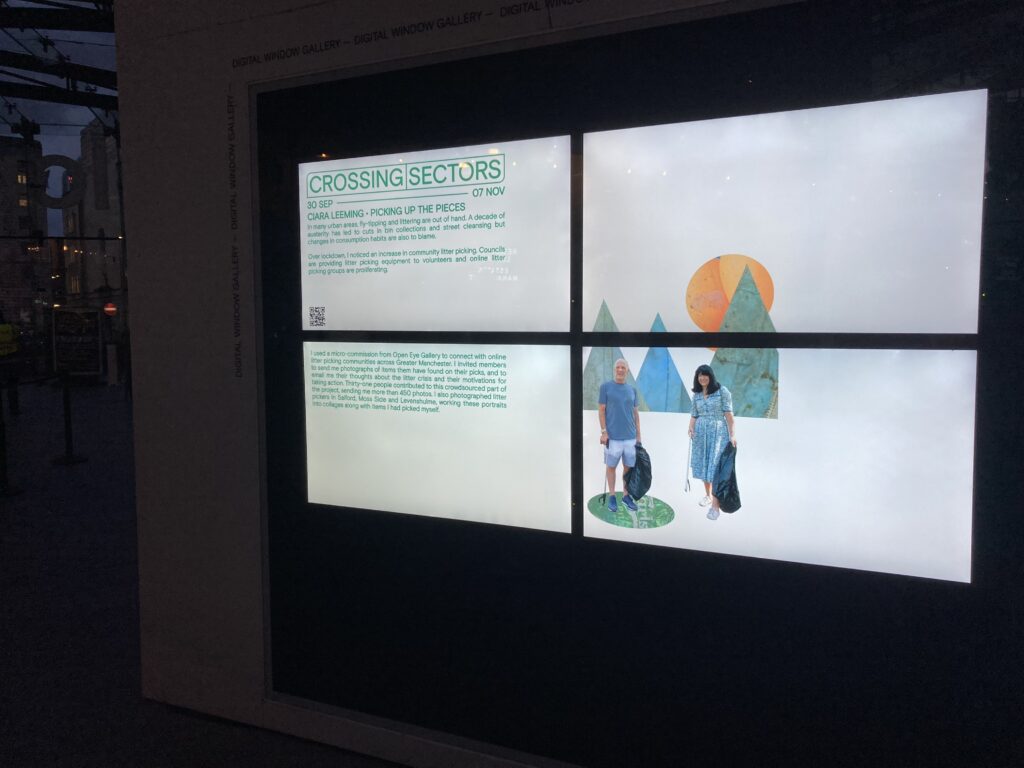 Yesterday some participants from the Crossing Sectors programme at Open Eye Gallery got together in person for the first time – a year after we first got to know each other. Unfortunately I couldn’t join them as I had a Making of Us session, but I’ve been kindly sent some photos of my litter work which is currently on display in the gallery’s digital window. Exciting. 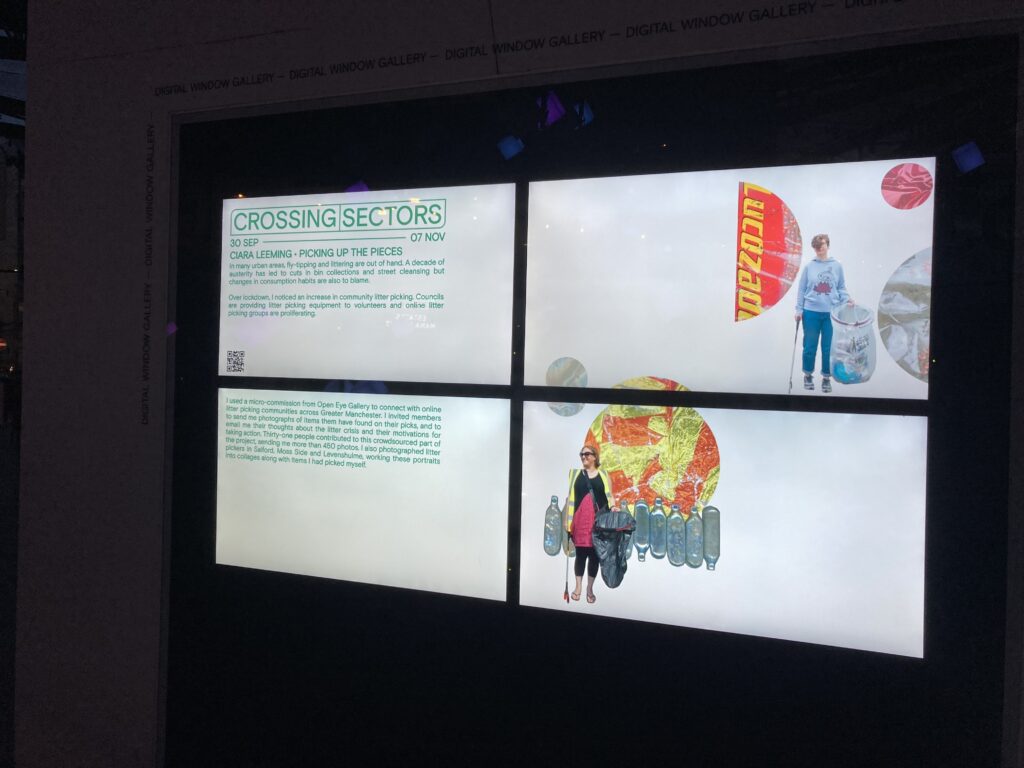 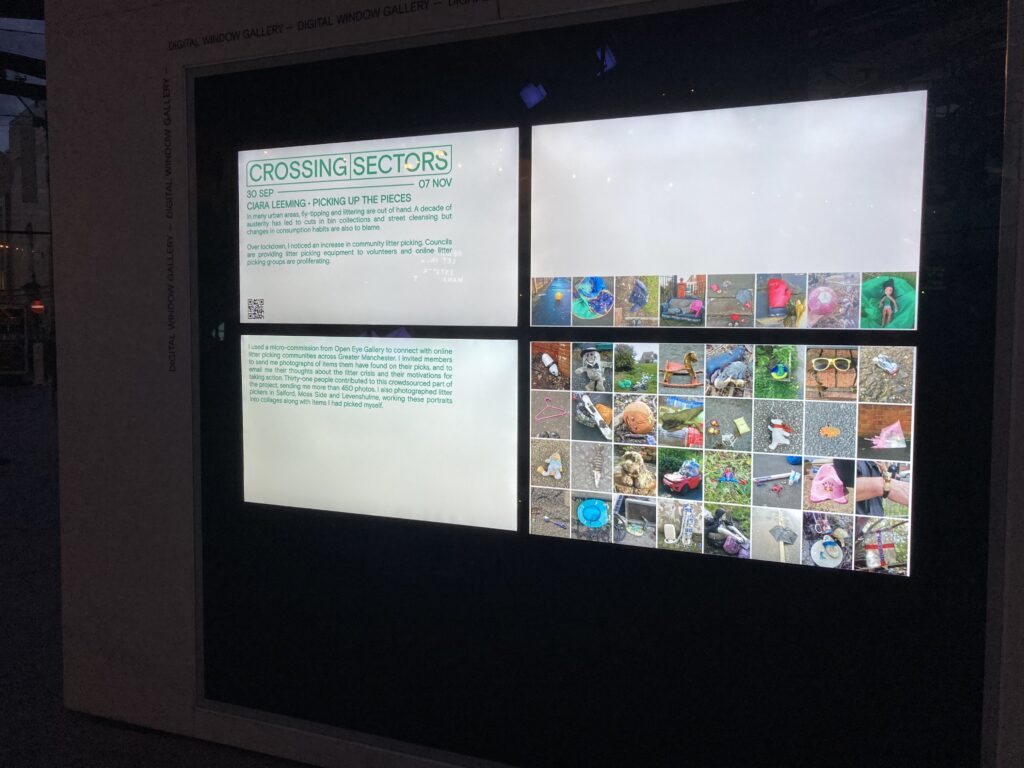 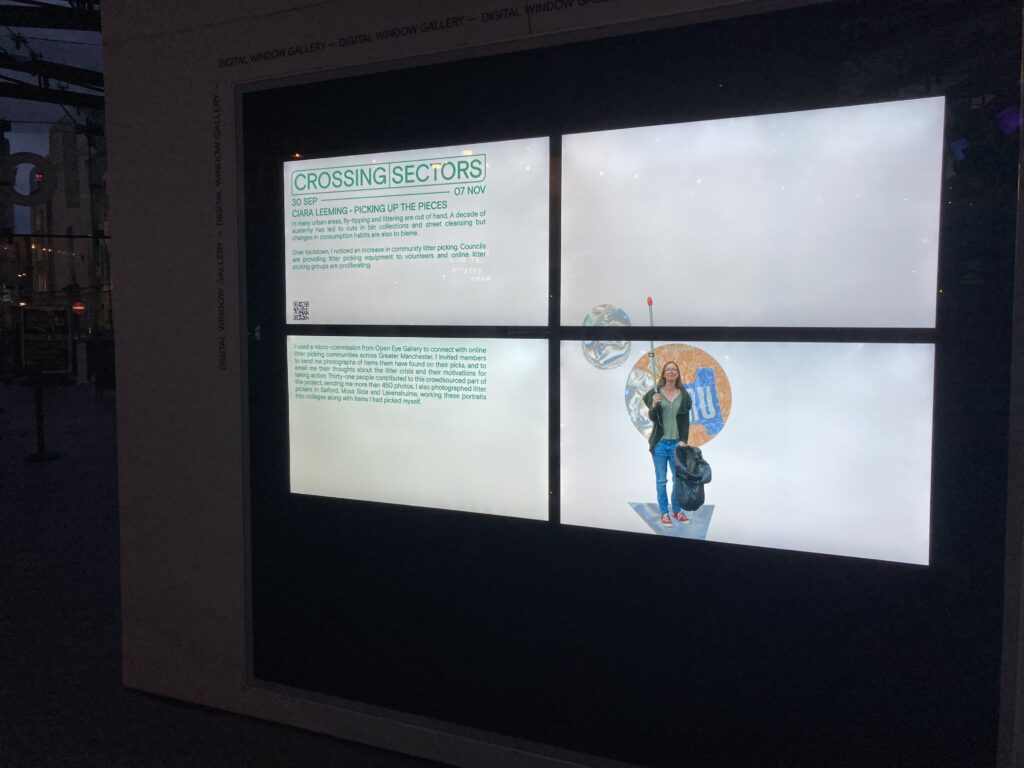 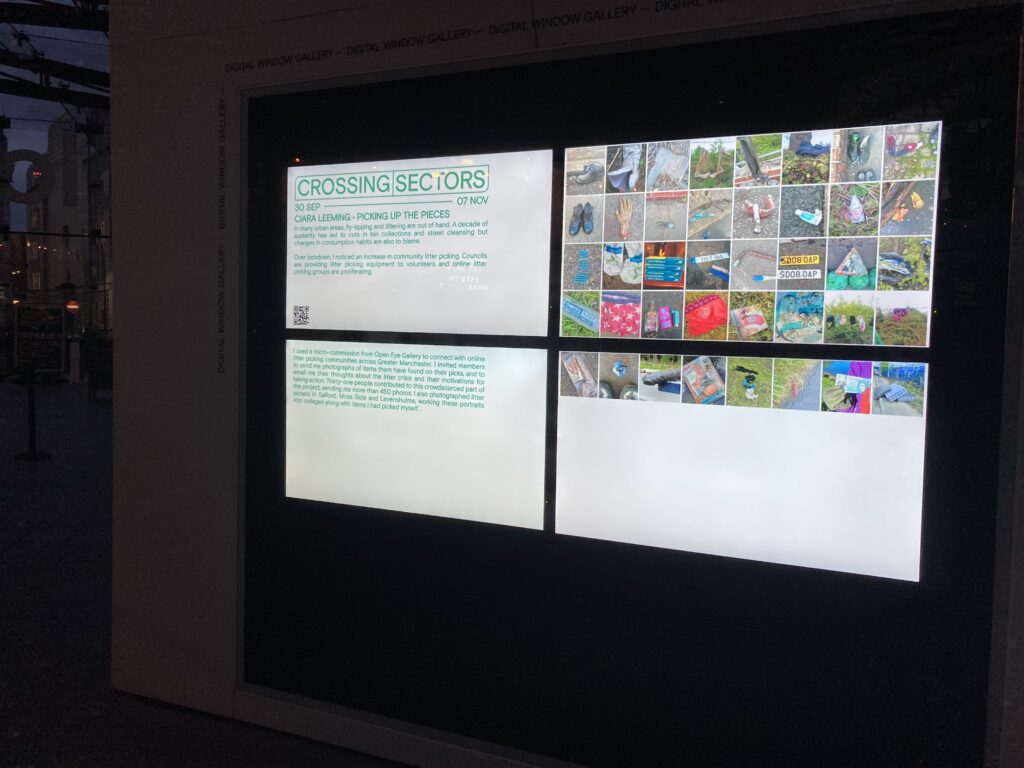 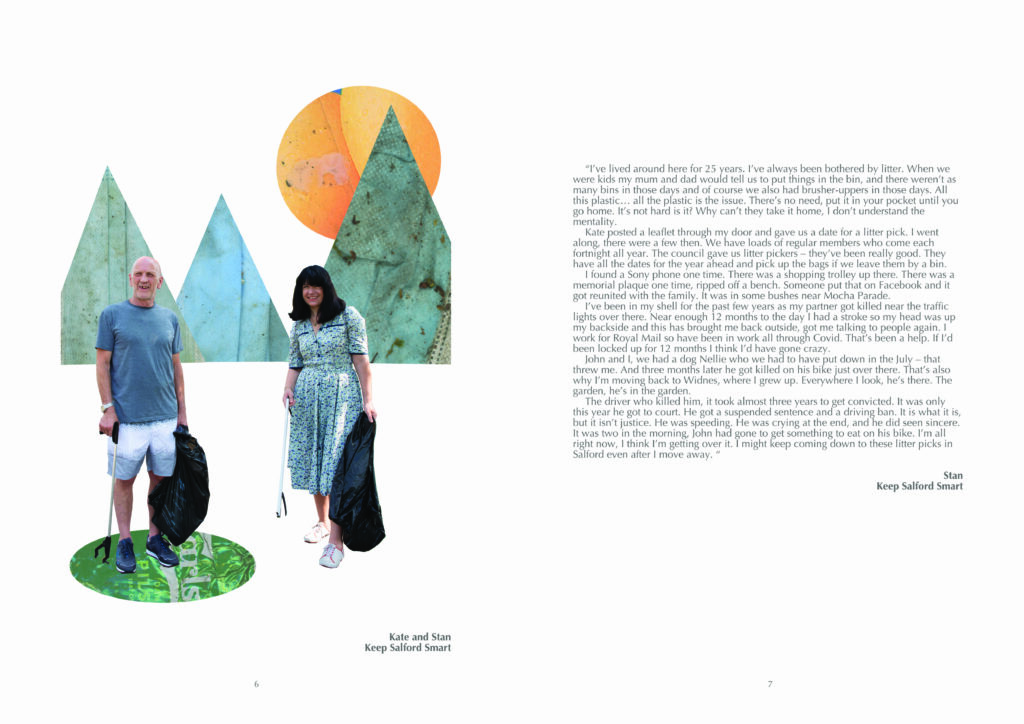 I can finally say I’m finished with my environmental micro-commission for Open Eye Gallery in Liverpool – which has seen me take a socially engaged look at the issue of litter (and celebrate the growing army of volunteer litter pickers who are trying to make a difference).

More than 30 people sent me their photos and/or thoughts about this problem, which was amazing. And in addition to that I tagged along with three litter picks in different areas of Manchester, and photographed the volunteers – going on to turn the images into collages.

I’m really grateful to have been given this opportunity by Open Eye Gallery – basically it bought me some time to have a little play, take risks and to develop a socially engaged way of working that little bit more.

Because there are a few different strands to this project I’ve chosen to present it in a little document. You can see it in gallery over here or download the whole thing in higher resolution using this link. Thank you to all the people who contributed their thoughts and images.

There will a little online event in early September where I get to talk about the process a little bit, along with fellow photographer Marge Bradshaw, who was also given a microcommission. Learn more about this here and please come along.

Last time I posted I shared a collage from my Open Eye Gallery micro-commision on litter. From that point on I felt as though I’d found my groove with the collage element of this project. I’ve gone on to make several more of these – I now have eight in total. I ended up resorting to digital collage for these – chopping up bits of my litter scans in Photoshop and piecing these back together in a rather minimalist style with cut out portraits I’ve taken of litter pickers. Now I need to find a way to hang this part of the work together with the crowdsourced content (images and quotes) in a way which makes visual and narrative sense. For now though, here are some collages:

The experiments continue…  Last Thursday and Saturday I photographed three separate groups of litter pickers, in Salford, Moss Side and Levenshulme, a total of 17 people. That’s way more than I intended, as I hoped for maybe six people in total, but it gives me more choice.

I photographed them using my normal camera but also using a strange yellow polaroid film, which left me feeling like I was wearing old fashioned swimming goggles. I just used that to see how it came out to be honest. This evening I’ve started playing with using these in collages. I only have one so far, but I quite like it. I don’t know when I’ll feel I’m ‘there’ with the work – it all feels incredibly bitty but I guess that’s the point with an R&D bursary type project…. 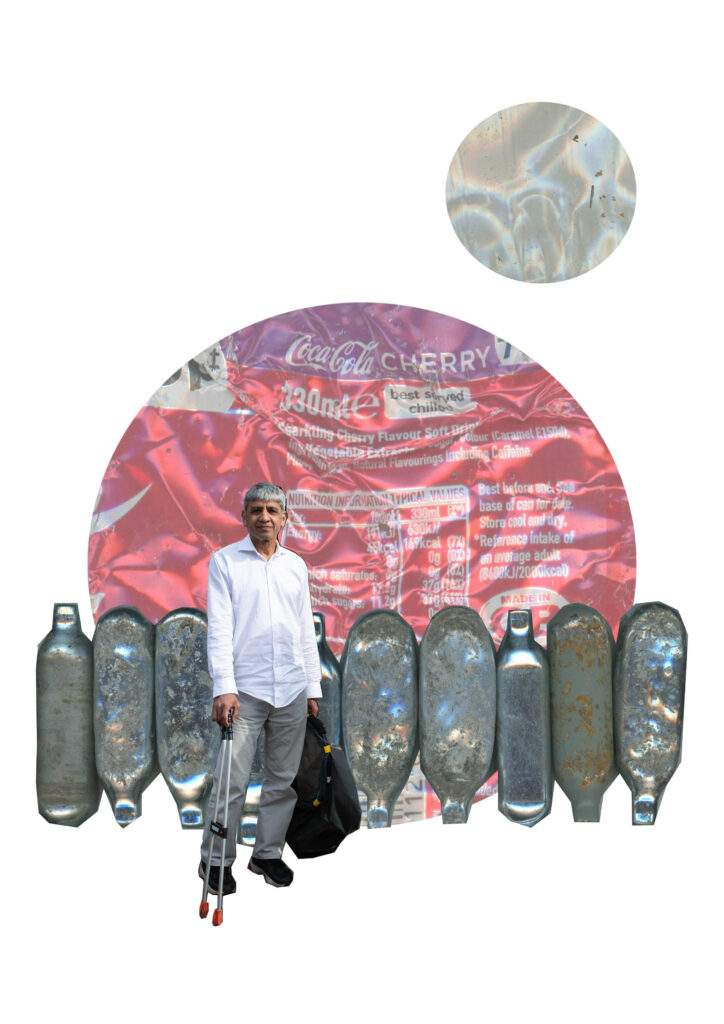 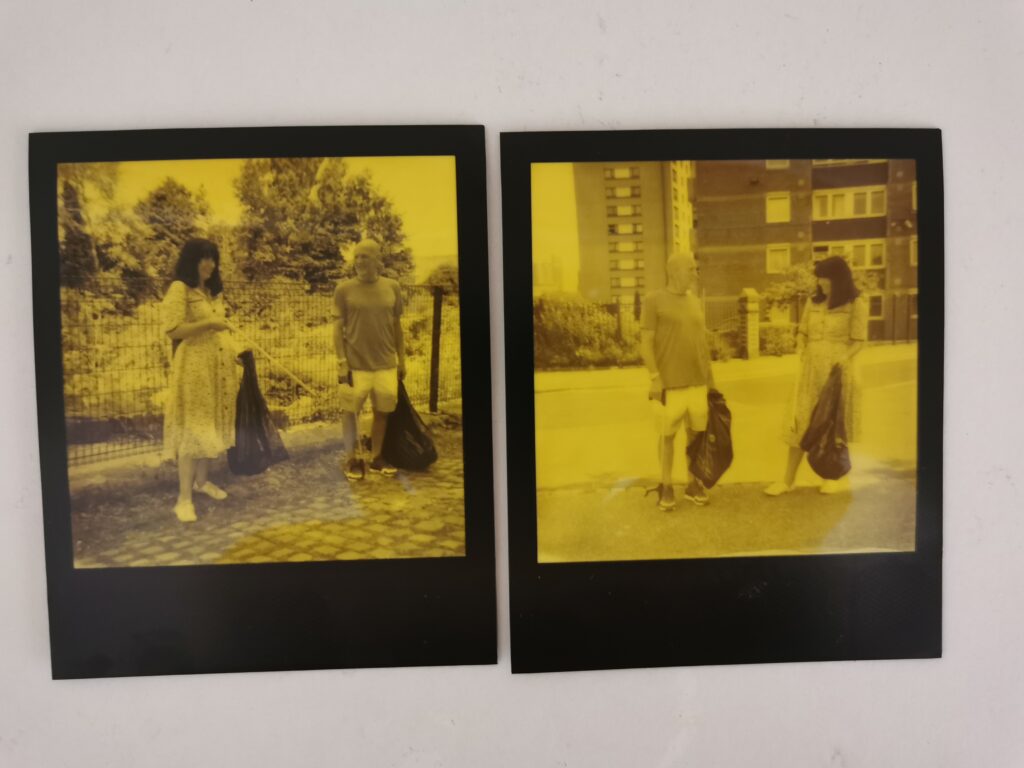 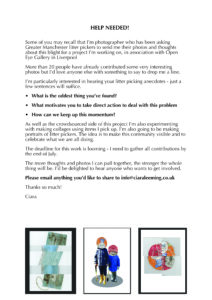 I’m still not 100% sure where I’m going to end up with this litter project but community members are continuing to send me photos of their finds in dribs and drabs. I’ve now posted two open calls in a large number of Greater Manchester litter picking websites over recent weeks and received a decent response (31 people). I’ve also exercised my own form of ‘dynamic recruitment’ – where I invite particular people to get involved beyond the open call. If I see interesting photos being posted in a litter picking group I’ve been contacting the poster directly and asking them to send them to me.

There were two other main strands in my proposal to Open Eye Gallery, namely portraiture and collage. My original plan was to combine the two but I’m not certain that’s going to work at the moment. I am currently compiling a small hit list of people I hope to photograph over the coming few weeks – the project is a micro commission so I’m only aiming for around five or six portraits I think. As for the collages – well, I’ve started experimenting a little with this (school closures keep stopping play) and was initially feeling a bit wobbly about it.

I quickly realised I’d have to work with photographs of litter rather than the real thing but even they have been leaving me feeling extremely queasy. A week or two ago I went on a solo litter picking walk and ended up scanning a number of the items I had collected. I wore gloves and used antiseptic wipes but the whole thing left my stomach feeling pretty off and despite being in the house alone I felt almost embarrassed by what I was doing. There may be something to unpick there about my own rather visceral reaction!

For a few days I couldn’t even bear to open the files. I could see the little photo icons sitting on my desktop and even they made me feel weird. Then I spent a day chopping them up in photoshop and moving parts around and even that made me want to hurl. I think for me the facemarks are definitely the worst. I’ve internalised the very idea of them potentially being contaminated with germs. I don’t really know beyond that why I feel like I do.

At that point I thought maybe I was onto the wrong track – after all if I can’t bear to look at these images, how could I expect anyone else to do so? I tentatively showed a few to a neighbour, who suggested that discomfort is where the art is and thought I should ‘lean into’ these feelings – maybe contextualising them somehow with a statement. I shared a few on Instagram and got an unexpectedly positive reaction. So on I’ll go.

I’ve printed off some of these scans as photos so am going to try physically collaging with them. And I’ll try to also use this opportunity to improve my Photoshop skills by working with digital collage as this is something I’ve never done.

Recently I was lucky enough to be awarded a micro commission by Open Eye Gallery, which allows me to use a socially engaged approach to look at the issue of litter. I’m treating the commission like a bursary – so using this opportunity to test out some ideas and see what works.

My proposal was to engage with the growing army of volunteer litter pickers which I’ve noticed have sprung up during the pandemic. My belief is that as people have spent more time in their local environments, they have been spurred on to do their bit to make it better. Perhaps littering itself has also increased over the past year – it’s hard to know as my own neighbourhood has always been filthy.

My project is going to work on several levels. I have been posting an open call into various litter picking groups across Greater Manchester over recent weeks, inviting people to send me photos, anecdotes and opinions. So far, 23 people have sent me either photos or words or both. I have around 350 photographs, and it’s fair to say people have been finding some strange and at times surprising items on their travels. Here are a few of them:

The second element of this commission is going to involve me making some portraits and collages… I am still thinking about how to actually do the collage part and am going to have to spend the next few weeks experimenting I think. I’ve been playing around with making cyanotypes of some of the litter I’ve been picking up – for no reason other than that I’d never made cyanotypes before.  The cyanotypes themselves have been a bit rubbish (poor workmanship!) – but I have to say I quite like the look of the digital negatives I’ve been making in order to produce them, I find them quite striking.

The items I’m personally most drawn to photographing at the moment seem to be PPE (everywhere) and those stupid little nitrous oxide canisters which are also everywhere. How to integrate those into collage, I’m not yet sure. Watch this space.  I’m going to try to blog this process as a way of keeping track of this project as it progresses.

I’m highly aware this is a subject other photographers have covered. The best is Chloe Juno, who has been at it for about seven years now and has now amassed thousands of images. I also came across this Gregg Segal series today, where he photographed families with a week’s worth of their refuse.