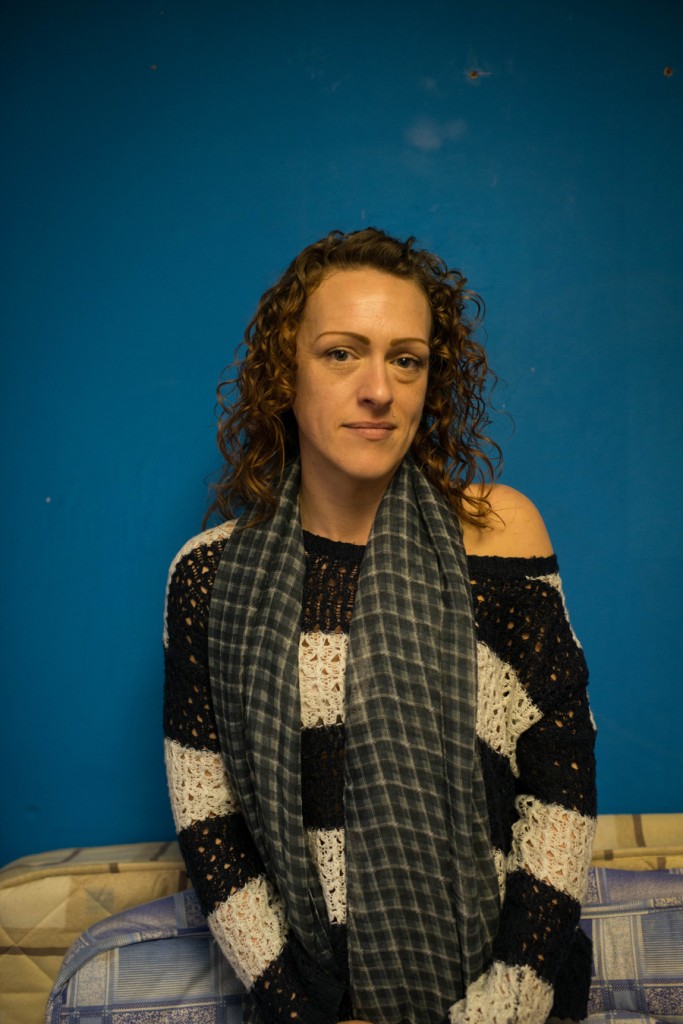 “This place offers a level of stability that many of us wouldn’t otherwise have. There are people in here who are willing and capable, they just haven’t been given the opportunities, for various reasons.

“We’ve got a lad in here who has been working full-time since Christmas, and he’s been able to hold that job down because of having somewhere to stay. Another resident has just found a local labouring job.

“We’ve got people who arrived, straight out of the doorways, holding a single plastic bag but now, thanks to donations from the public, they have managed to get some belongings – a few pairs of jeans, shoes and boxer shorts. These things make them feel a bit more human again. It doesn’t feel fair to strip them of their humanity all over again.”   Stacey Martindale 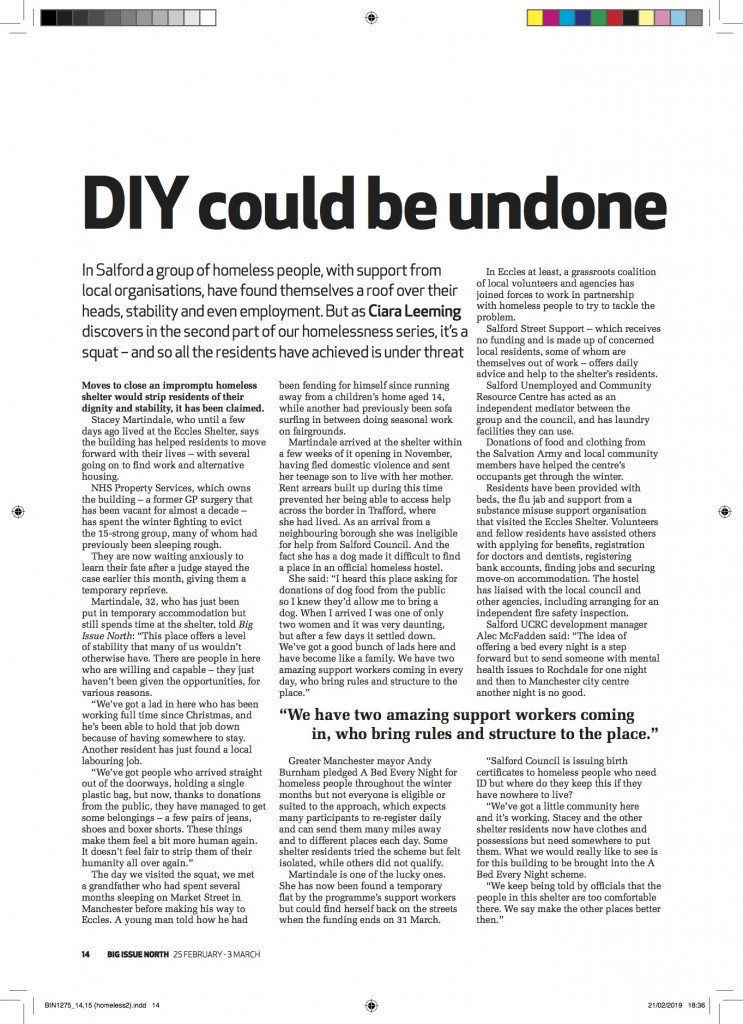 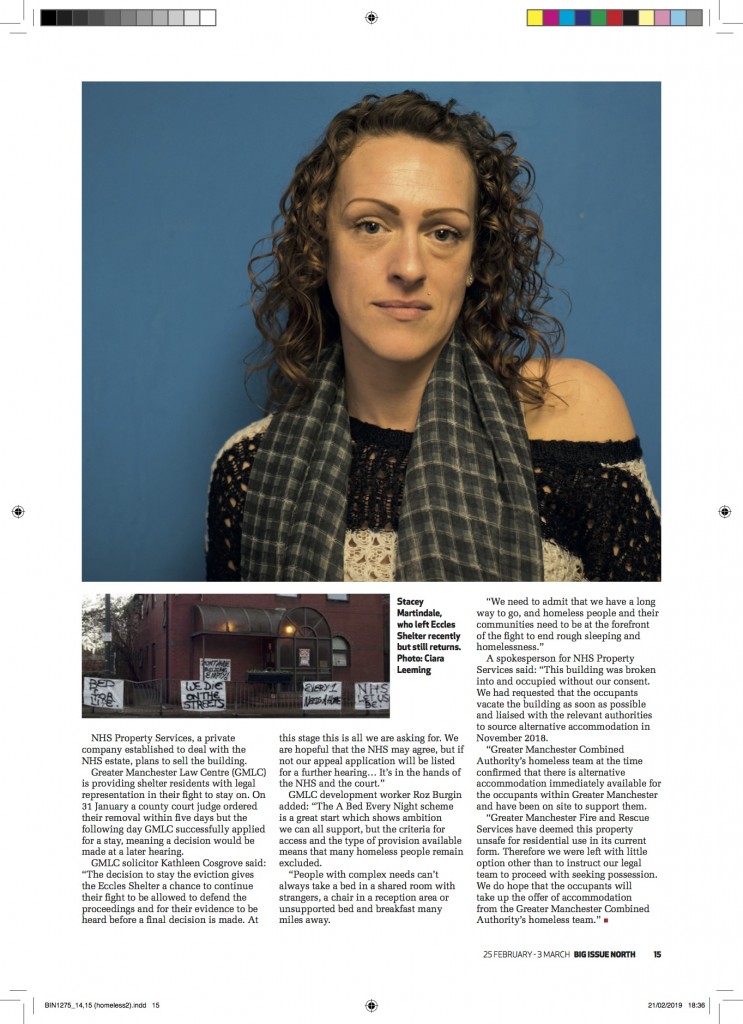 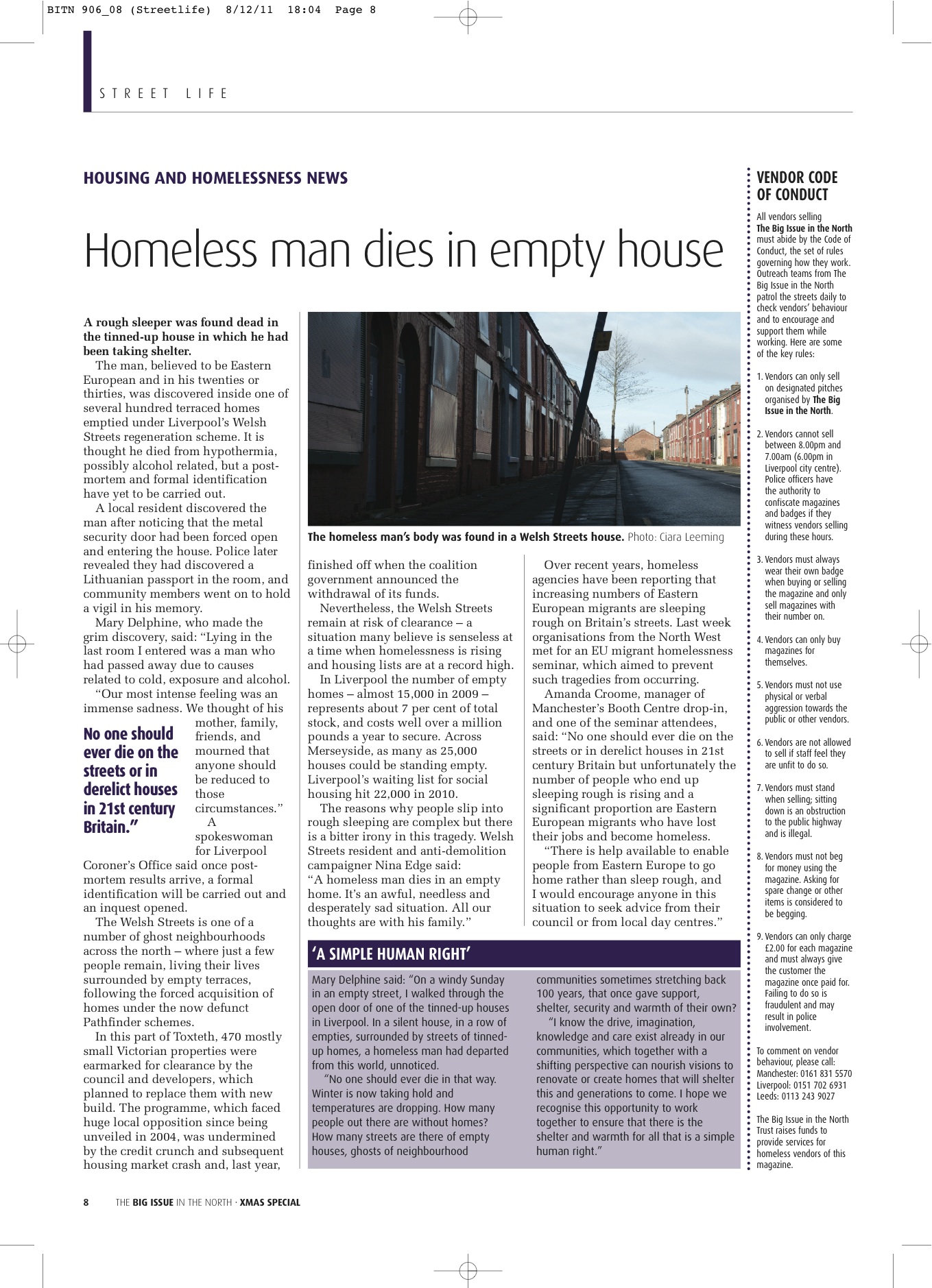 I’ve put a few pictures and five pieces of audio featuring the voices of homeless people from the Booth Centre in Manchester into a gallery on the photo section of my website.

Peter, 40, is a recovering alcoholic. He ended up on the streets several times as a result of his addiction but realised he had to do something when his kidneys started packing in. He started his journey to sobriety while living in a squat with other homeless drinkers and drug takers. “I wanted to kill someone. My body was screaming for booze but my head was saying no,” he remembers.

Peter is just one of the people I met at the Booth Centre, a drop in for homeless people in Manchester.

Please listen to his story.

It’s amazing how when I’m really busy I always manage to fill my time on stuff which has nothing whatsoever to do with my deadlines. While at university for the first time, it mainly involved tidying my room. These days I have plenty of work-related stuff to be getting on with – and this is the only time I don’t struggle to get things done (albeit not the things I really need to be doing). Anyway, I’ve spent all of today editing audio clips from my time at the Booth Centre, a drop in for homeless adults in Manchester, and then throwing some introductory audio together with some images to produce the little piece above. The reason why I’ve been doing all this is simply because I’m heading down to the centre tomorrow to show some of the service users my work. While I’m planning on mainly showing them a wide edit of images with no audio, I thought it would be nice to include a little multimedia as well. It breaks some of the golden rules I was taught when I trained with duckrabbit – namely that you shouldn’t have more than two voices within a piece like this, but I couldn’t find another way around it. I also have four three-minute-ish audio tracks edited down where these service users tell some of their own stories, which I’ll post in due course. I personally think they are quite interesting but if I made tomorrow’s group sit through them, I fear they may lose their minds. They’ve heard it all a million times before.

The Booth Centre is a drop-in centre for homeless adults in Manchester city centre. In this single room beneath the cathedral, people with a multitude of issues are encouraged to use their time positively. Opera singing lessons, art and cooking classes and trips to the bowling green and the centre’s allotment are among the sessions on offer each week. Most service users live with a drug or alcohol addiction and/or mental illness. While some will kick their habit or learn to live with their problems, others will not. I’ve been visiting the centre several times a week since March to get to know some of the regulars and take photos of their sessions, and carried out a series of interviews about their experiences. It’s been quite an education.

my photos so far to the service users at the Booth Centre tomorrow.

I think I’m already officially bored of this Lomoesque camera which I used for the first time the other week on a uni assignment. But I took it with me when I went Crown Green Bowling on Monday afternoon with the over-50s group from the Booth Centre, just to see what I came out with using black and white film and to try and mix up what I come out with from that project. The twist is that this is the first film I have ever processed (bar one last week that I completely screwed up by agitating the developing tank too much). Just to ensure the images came out extra-specially terrible, I scanned the negatives myself – again, the first time I’ve had a go at this. I can’t really tell where the problems begin and end but it’s been quite fun and certainly an interesting learning curve. Once again, I think I need to learn some patience…

I can feel myself getting quite attached to some of the characters I’m meeting during my time at the Booth Centre, a drop in centre for homeless and ex-homeless people where I’ve been spending two to three days a week since Easter. I haven’t ended up using my camera every day, but the vast majority of users have made me feel incredibly welcome and are being really cool about me being a fly-on-the-wall during their sessions. There is a hard core of regulars who attend the various classes but new faces are always appearing at the drop-in sessions where people can turn up for a cup of tea and some food. Those have been the times when I’ve felt a bit out of my comfort zone – overwhelmed by the attention and occasionally gruff comments and questions of strangers  – but I feel like I’m starting to break through.

I started this project after reading somewhere in the MA course literature that we would be asked to find a location where we could get sustained and repeated access. Something made me think of the Booth Centre, which I’d heard of somewhere along the line, and I fired off an email to the manager, Amanda. As always it came down to a combination of timing, luck and the right approach. They apparently get constant requests to help people with projects – from people like me as well as academics and students – and the answer is usually no. But this year is the centre’s 15th anniversary and Amanda felt this might be a good time to document some of the work they are doing. My pitch to her was that I have a long-term interest in issues around social exclusion, but am keen not to paint users of the centre as victims or any other kind of negative stereotype often attached to people who have experienced homelessness. This approach hit a nerve. She said yes and I decided to seize the moment and get started even though the assignment hadn’t been set. It may well not end up being my first assessed project as I have other irons in the fire. Time will tell.

I’ve written before here how I often wrestle with the fact that the niche I find myself in as a writer-journalist seems to me to be one of the major cliches of documentary photography. I’m trying to think how my skills can bring ‘added value’ to the story I’m trying to tell and I suppose the depth I’m trying to achieve in really getting to know some of the Booth Centre regulars as individuals in their own right is one way I’m doing this. I’ve taken a little ambient sound this week already and am planning to start doing some audio interviewing and hopefully some proper portraits over the coming week or two.  People are already offering up some really fascinating information about their lives as we get to know each other better…whether that will be the case when the audio recorder is running, I don’t know.

What is actually quite liberating about doing this project is that for the first time in my career I am working on a story with no final destination in mind. I have stepped off the editorial treadmill with this and am doing it entirely in my own time and am trying to approach it in an organic and open-minded kind of way. For a print journalist used to writing six stories a day while working on regional papers, taking my foot off the pedal in this manner does not feel natural and I continue to get pangs of anxiety and to feel the lure of other stories. I may not operate with anywhere near that ridiculous turnover today but my attention span sometimes feels damaged beyond repair by those early years. I am painfully aware that patience is one of the most important attributes for a great photographer, so this kind of practice is valuable.

Having no ulterior motive, editorially speaking, is actually turning out to a blessing because I am being honest with people who attend the centre when I say I’m doing this purely for myself and also so the Booth Centre can use the images. Leaving my journalist hat at home has helped me win people’s trust, while helping me to stay centred, to coin a terrible pun. That one really deserves a smack.