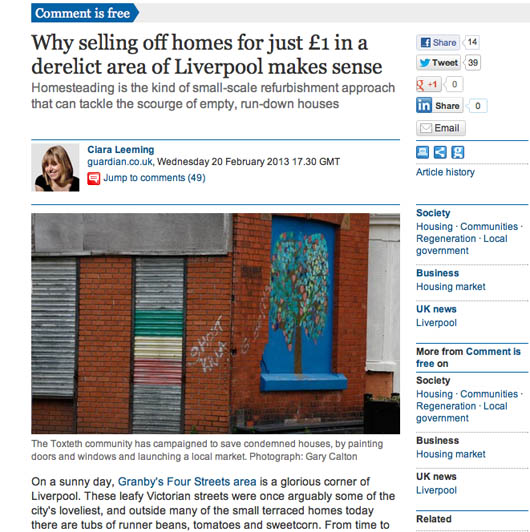 I’ve been feeling bad for a long time about not being able to keep up my Streetfighters project in the way I’d like to, because although Housing Market Renewal has been discontinued, the story is far from over for many of the people I’ve met along the way. There are loose ends all over the north – householders trapped in derelict streets, projects put on hold by developers amid the recession, and tussles still going on over the future of some neighbourhoods which were earmarked for clearance and decanted. I never managed to secure funding to support this project so can only follow up people’s stories on an ad hoc basis, where I have time and can afford to do so. If I could do more and do it better, I certainly would.

Maureen and Terry Walsh were some of my favourite Streetfighters, and I’ve met them a number of times over the past five or so years. They spent seven years fighting to save their home and their neighbourhood from the bulldozers after Oldham Council announced plans to demolish hundreds of properties in Derker under its Housing Market Renewal scheme. When they finally admitted defeat in 2010 and began the process of purchasing another property, the rug was pulled from under them and acquisitions were stopped.

Terry died in January 2012, not long after they learned their home would be spared. It is a bittersweet victory for Maureen, whose community has vanished.

* Maureen also filled me in on the fate of a couple of other Derker residents who I have profiled for this project. Elijah, the war veteran in his 90s, moved into sheltered accommodation this year and his house has now been demolished. Joan Diggle recently moved into a new house near her brother in another part of Oldham.

– Elijah Debnam photofilm: A kick in the bricks 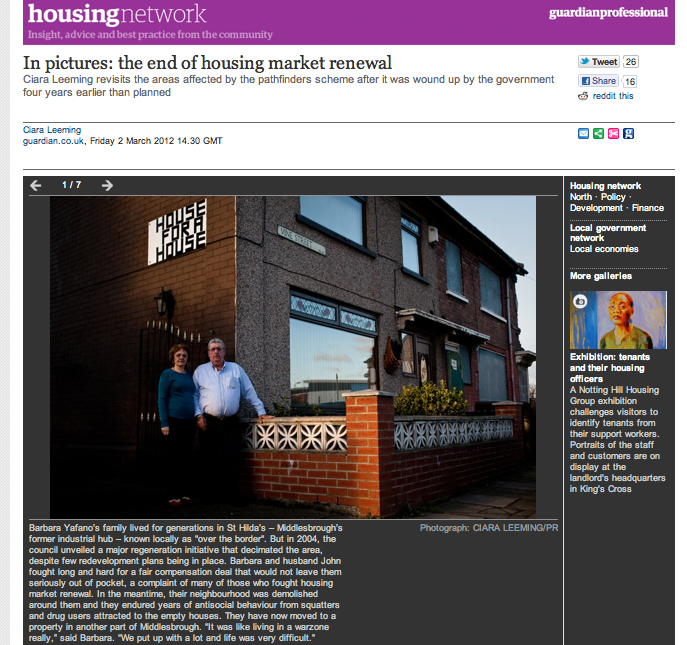 The Guardian’s housing network – a section of its website aimed at professionals – ran some of my Pathfinder images in a gallery yesterday. 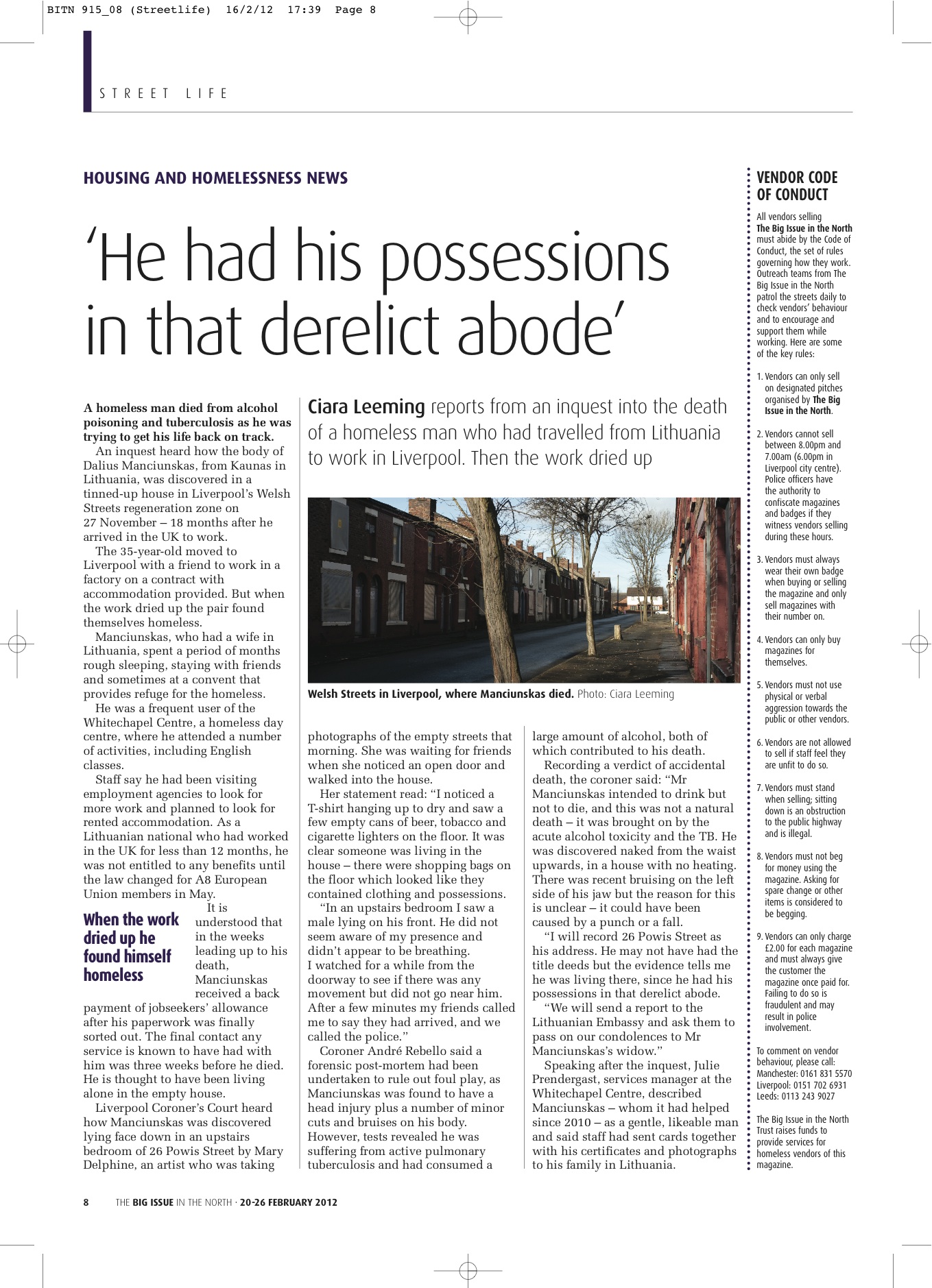 For more background on the blighted streets of the former Pathfinder areas, see my Streetfighters site.

Forgot to post this when it was published. The corpse of Pathfinder continues to twitch in many areas of northern England. And my Streetfighters project also limps on. 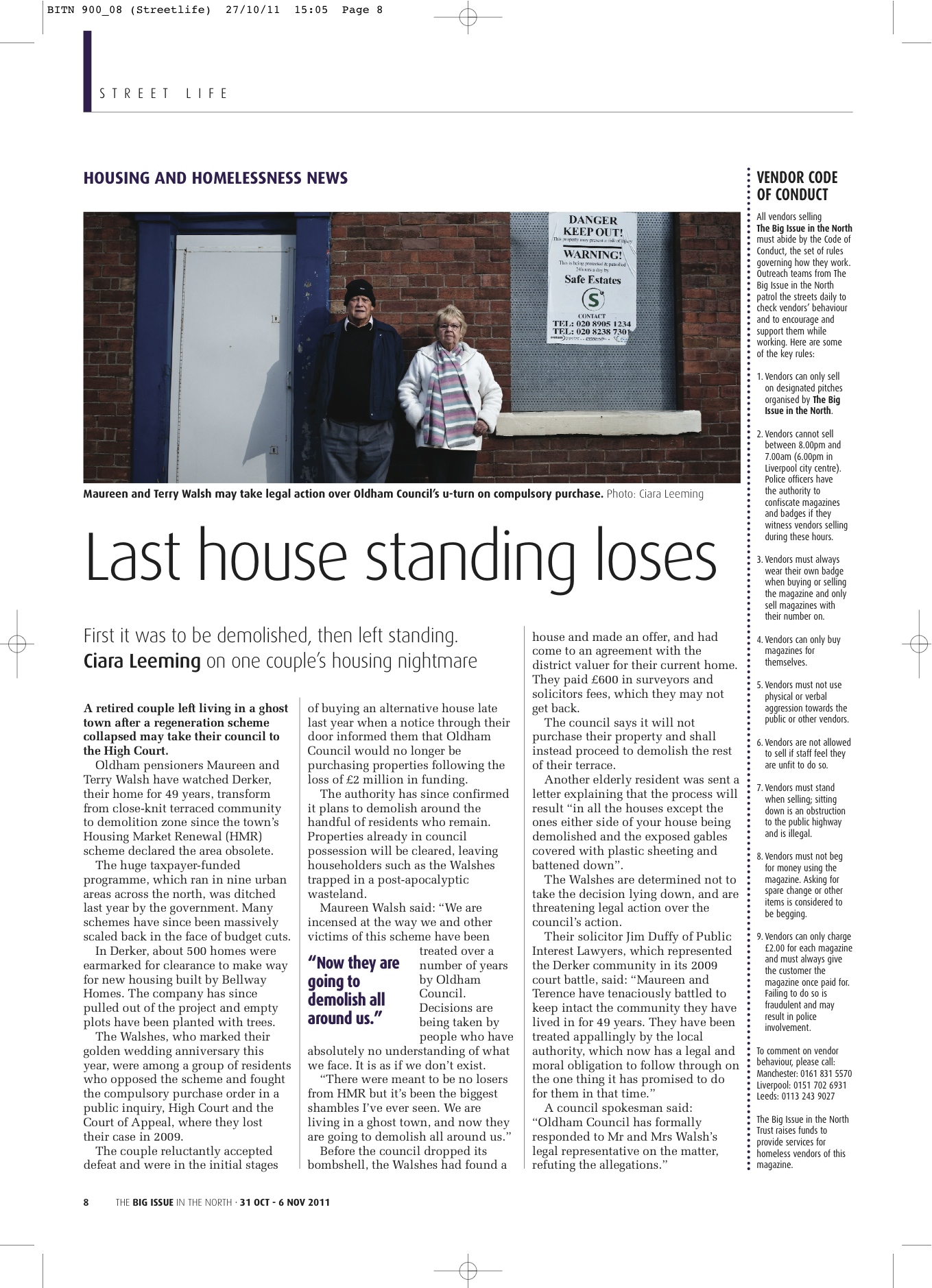 A few months ago playwright Chris Hoyle got in touch to ask me about my Streetfighters project, which he’d spotted while researching his latest project – a story set on a tinned-up condemned street in Salford.

Tinned Up hits the Lowry theatre in a month’s time – just a mile or so from Seedley and Langworthy, an area of Salford where I got to know a number of residents facing a similar fate (such as Jim and Nancy, on the book cover below). More about Chris’ play here.

If I took one thing away from the very inspiring Amnesty Media Awards earlier this week, it was the sense that I have not tried hard enough to find ways to continue with this project. I’m going to try and put that right.

streetfighters | Make Your Own Book

Some of my Streetfighters multimedia work is being shown at this ASA Collective event tonight – wish I lived in London so I could go along. Not sure how I made it onto the line-up but I’m grateful for being invited.

I had some cracking news today. I’ve been told by Amnesty International that my Streetfighters project has received an honourable mention in this year’s AI Media Awards, in the digital category.

What makes this even more exciting is that the three shortlisted projects are all by well-funded major news organisations. They are:

It’s exciting to be in such esteemed company.

My Streetfighters regeneration project was mentioned on the BBC picture editor, Phil Coomes’ blog today, along with a similar but different project by photographer Victoria Birkinshaw. I’m very grateful to him for supporting the work. I really want to take another look at this subject soon – I’ve just been struggling lately what with lots of uni and other journalistic work.