Maureen and Terry Walsh are pensioners from Derker in Oldham. They’ve lived in their house almost all their married life but learned a few years ago that their terrace was going to be demolished under the government’s Housing Market Renewal scheme, which aims to tackle what ministers and some academics say are failing housing markets in areas of the North of England. The couple – not natural activists by any stretch of the imagination – were part of a group which challenged the Compulsory Purchase Order in the high court on various grounds where they believed mistakes had been made. They reached the end of the road in October when their case was rejected. They must now start looking for places to move to, but like many in their situation – especially those who have paid off their mortgages and are now retired and on a fixed income – they complain that low compensation payments will put them back in debt, or into social housing. This is a common complaint: why can’t we get a house for a house. 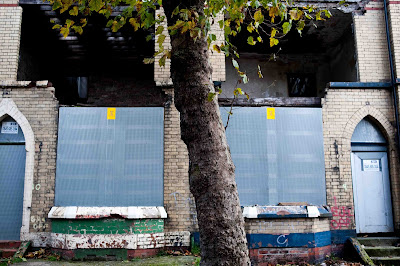 People who know me or my work will know that urban regeneration is a subject I’ve covered a lot as a writer over the past three or four years. Well, since I’ve become more interested in photography it seemed natural to continue with what has become something of an organic project for me in a more visual way. I’m not sure I’m necessarily achieving this, but over the past five months or so I’ve been busily visiting people all over the north of England who have been affected in some way by publicly-funded regeneration schemes. In that time I’ve been from Manchester to Middlesbrough, Liverpool to Hull and many places in between. So far I have 25 portaits and audio interviews, each of which I’ve edited down to a few minutes long. I think most of the people I’ve met so far would say they have lost out as a result of what they’ve been through – but this project is far from finished. I’ve simply started with who and what I know….I hope balance in that respect will come with time. I hope, of course, to get this work published once it is ready….certainly a few of the individual stories have already been used in different ways. It may be of little interest to many people but I want to do the individuals I’ve met the service of getting their voices ‘out there’. I think that is important in itself.

I’m not claiming to be objective or scientific, but hopefully some will appreciate its value as a document. I’m wavering beteen titles – Street Fighters has a nice ring to it but isn’t appropriate for the more positive stories….Home/castle is the most neutral I can think of for now.

One thing I can’t help wondering when I visit these urban wastelands – many of which have been largely tinned-up for five years plus now – is what the future holds. These Housing Market Renewal or HMR-inspired projects rely on large chunks of taxpayers’ money, as well as PFI involvement from volume housebuilders. Neither central government nor the building industry are exactly cash-rich at this point in the recession. Not to mention the fact that houses just aren’t selling at the rate they were when Pathfinder was conceived. With people unable to get mortgages it begs the question, who are we building for .

Two things seem to be happening, from what I can tell. In some areas houses are just standing derelict and presumably will continue to do so until market conditions improve. In other areas vacant homes are being demolished and land banks created for future development…by developers known or unknown. Meanwhile, thousands of people are stuck on housing waiting lists in towns and cities across the country. It just doesn’t make sense.

With developers left, right and centre putting projects on ice until market conditions get better – and a likely change of government around the corner – it makes me wonder what is going to come over the next year. These are not areas with potential Tory voters, and given the huge spending cuts on the horizon, surely it’s unlikely HMR will continue in its present form if (or when?) David Cameron wins the next election. What will that mean for Anfield, Oldham, Salford and the like? I can’t quite see how this is going to have a tidy ending….perhaps we are seeing, for all the good intentions of some of the regenerators, a return to the dereliction and social blight that marred many of these neighbourhoods during the 70s and 80s.