I’ve spent a lot of time over the past year or so thinking about how Gypsy and Roma people are represented and misrepresented through photography. I wrote a research paper which touched on this for my MA and my two following projects – Rethink and Elvira and Me – both attempted to challenge the prevailing visual stereotypes of these two connected but separate communities. So it feels somewhat ironic that I have spent the past two days chasing websites which have stolen and then misused my work. Or perhaps it was only a matter of time.

Yesterday I received a phone call from a pretty upset Ramona, who had found a photograph of herself on the internet while searching for stories in the Romanian media about Roma migrants in the UK. She was shocked to be confronted with a photo of herself selling the Big Issue within an article which had absolutely nothing to do with her – it was a story about a group of named Roma squatters who had moved into a woman’s home in London – and wanted to know if I had given it to the website. I knew the story she was talking about as I’d seen it in the Daily Mail, which used a portrait of the victim, but I was furious see the Romanian site had lifted a photo I had taken for a Guardian Society story and run it with their piece. Ramona, understandably, wanted the photo removed as soon as possible – she hated the idea she was being associated with criminal activity in this way. 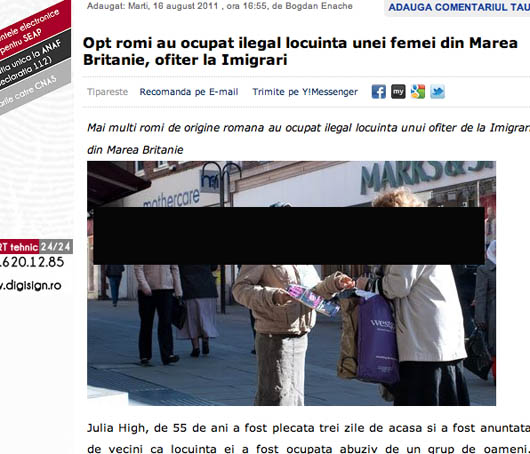 I mentioned what had happened on Twitter while I was pondering how to proceed, and a contact with far more computer know-how than me replied to say he had found the very same image being misused elsewhere. This time it was on a British blog about deaf people, illustrating a court story which had been itself been lifted from the Manchester Evening News. This case was even more unbelievable to me – a clearly identifiable photograph of Ramona was being used to illustrate a story about a different named Roma woman from Manchester who was prosecuted for begging using faked documents which claimed she was deaf and dumb. 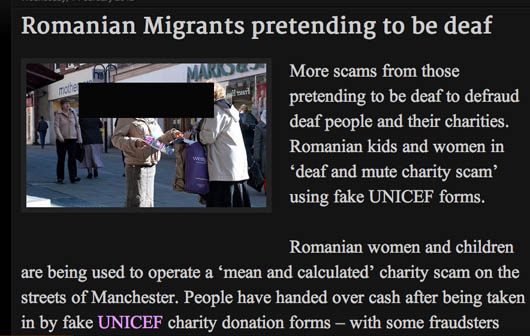 This morning I searched for another similar photograph which I have only licensed to Equality, a charity which advocates for Roma migrants in the UK. I wasn’t exactly surprised to see this one had been commandeered by a different Romanian news site, again as an illustration photograph in a highly negative story about Roma migrants in Britain. This time my friend was being associated with benefits tourism and the idea which is gaining traction in some sections of the UK media that Romanian Big Issue vendors are all here to scam the benefits system. 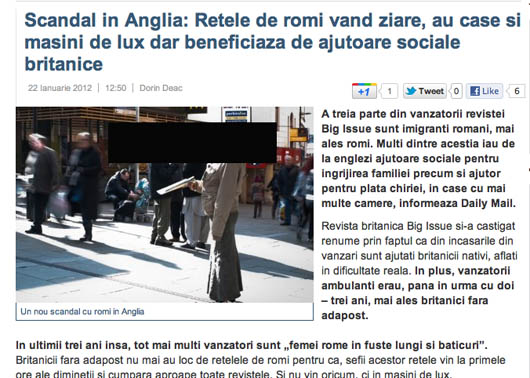 Thankfully in all three of these cases the people behind the websites took down the offending photographs promptly after I sent a complaint by email, two of them before Ramona even knew about them or had seen them.

For me this has been a real lesson. Of course it’s annoying when people lift your photos and use them without permission, ignoring your byline and infringing your copyright. But far more serious to me is what I see as the abuse of the very essence of my work and of Ramona’s image – I described it in my complaint emails as defamation through the use of photography, and I truly believe it is. I am going to have to be very attentive from now on about how my Roma work in particular is being used and abused.

I totally understand that many people who run blogs and websites are untrained in media ethics and perhaps a little naive when it comes to the politics of visual representation. But if they are going to publish online they have a responsibility to think these matters through before stealing and then posting images completely out of context.

Crucially for me though, this has underlined the very important issue about stereotyping minority communities such as the Roma through photography.

I am CONVINCED that had the criminals and/or alleged benefits tourists in these three news stories been ethnic Romanian (for example) as opposed to ethnic Roma, very few people would think to use photographs in such an ill-judged way. Nowhere I have worked would we ever have used an identifiable photograph of some random person to illustrate a story about criminality committed by someone else simply because they happen to share an ethnicity….it would be big trouble if we did. So why is it ok to do so just because someone is Roma?

Is it ignorance? Casual racism, perhaps? – the idea that all Roma people are interchangeable and/or a bit suspect? The misconception that Roma Big Issue vendors couldn’t possibly chance upon their own photograph online in the way Ramona did, and so therefore these things don’t matter? I’m not sure but it maddens me and it made Ramona furious too. I’m very fortunate that she is open minded and has colleagues who can help me explain the nature of the internet and how images can get copied and pasted in this way. Happenings like this have the potential to undermine months of hard work on a project like mine.

I really hope the people on these websites have learned something through this. Everyone makes mistakes but photographs are powerful. I will not allow my work to be abused in this way.