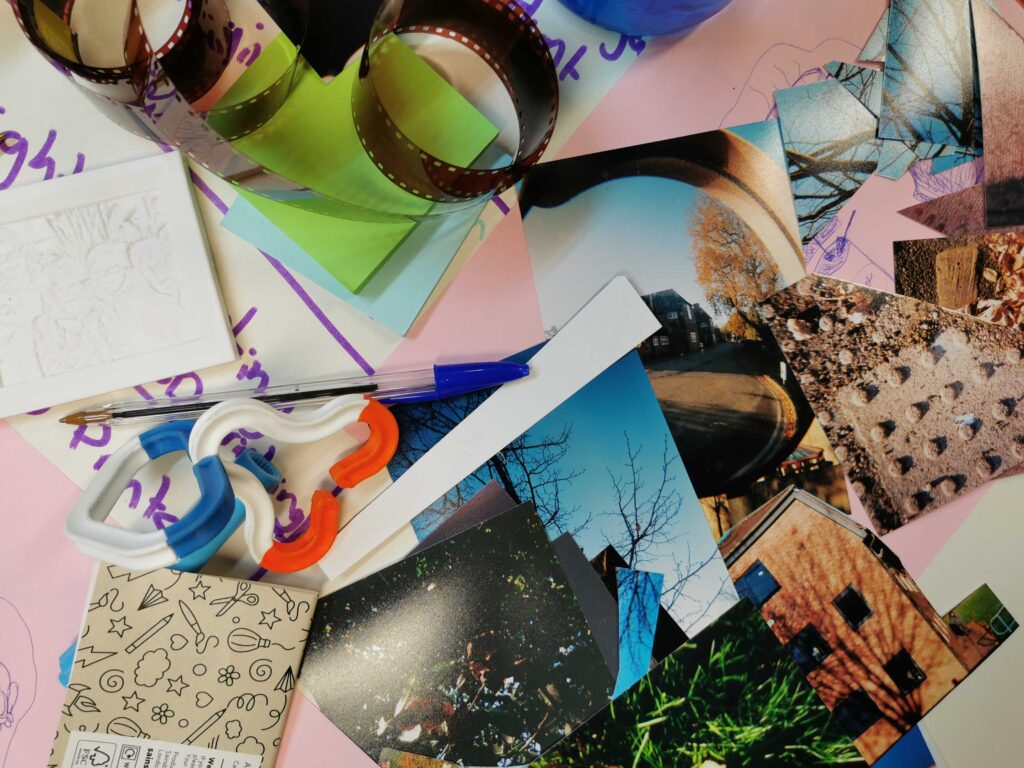 This week we ran our second workshop at the Together Trust for the Making of Us project. The first session we used disposable cameras with the participants – the only snag being that two of our five participants were absent, and their cameras needed to be filled up by other people. This was important as the resulting images were the basis for workshop number two – the downside was that because they hadn’t taken the photos themselves, there was potential for them to be less engaged. Anyway, after a bit of stress with broken machines at the camera shop (I thought for a while the pictures might not even be ready) we returned to the school with negatives and prints. We watched a couple of short Youtube videos about film photography and the darkroom, to give them a little bit of understanding of how it all works, and we did a warm up exercise that I learned on Crossing Sectors, where you draw around your fist and then respond to a series of drawing prompts within that shape, which then promote discussions as a group.

We then spent some of the session supporting the group to make collages out of their images – this was a bit of an ask it turned out, as I hadn’t thought about the fact this might be out of the group’s experience or comfort zone. Some participants got into it faster than others but all five ended up making a collage by the end of the session. This will form the basis for a 3D print, which Jamie-Lee will bring back to them in the final session. We also intend to do some light painting in the next session and I’m having to quickly scrabble about to buy suitable second-hand digital cameras (which allow users to use in semi-manual modes) as I have suddenly realised I’m not so comfortable with the idea of using my own work camera and laptop for this – I stopped paying to insure my gear a few years back. I don’t want to tempt fate in this way.

How socially engaged is this project at this point? We’re trying to build trust with the group and to get their feedback as we go along but it’s not clear how much they are getting out of it. We’re reflecting on our practice as we go along both together and individually. Thinking of moments which could have gone better, and which have gone well. We’re asking the school staff for constructive feedback as well. As for where we could go in future sessions, we have a rough plan but it’s subject to change if we feel the group could benefit from something different. I’m not as stressed out as I thought I might be about this situation – no doubt because I’m working with a partner, and have a support system in place and also don’t have the pressure of outputs at this stage. I’d like to build participant feedback into the process more but it feels like that could take more time and a lot more work. Anyway here are some of the lovely disposable images the group shot last week and a few of their fabulous collages that they made this week.