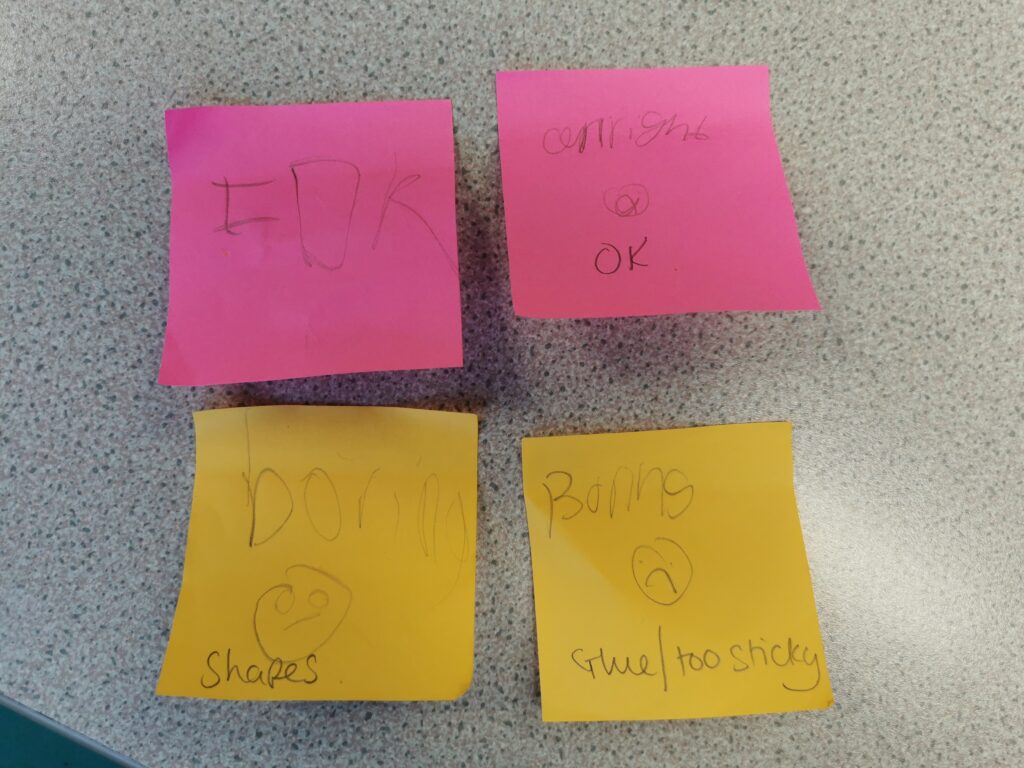 It was our penultimate session at Ashcroft School for the Making of Us this week. The workshop had its high points but didn’t entirely go as planned. Only two of our five young people were present – one appears to have dropped out altogether, another was meant to be there but has other things going on which are putting her in the wrong headspace, and the fifth person had gone home ill. Not the greatest of starts, compounded by their lack of enthusiasm for some of what we were proposing… it can often feel like pushing a boulder up a rock during these sessions, but it didn’t really get to us this time. We get it now.

We started with a game – Pictionary cards – where you use cards to mime out a word and other people guess. The two participants were very reluctant to get involved but with a bit of pushing from their teachers, they eventually got into it and even helped act out one or two words. Turning it into a competition involving a timer seemed to help with this – this was an inspired bit of knowledge from Jamie, my partner facilitator, who herself has ADHD so understands some of the young people’s issues. She says introducing competition to things helps to get her attention fixed on a task. Good tip.

The creative exercise this week involved Tengrams – making images using pre-cut coloured shapes, in this case different kinds of triangles. The aim was to build on last week’s cyanotype session, which saw us make a backdrop of the sea. We wanted to make images of fish and other sea creatures – the triangle idea came from school, which has recently covered triangles in maths. This exercise, it has to be said, didn’t really light anyone’s fire. The two young people were much more restless than the previous week – they both had to go for a little walk during the session (this is written into lots of people’s education plans at the school but it was significant that it wasn’t necessary during the cyanotype workshop, as they were so engaged in what they were doing). Both participant fed back afterwards that they found this activity boring – and one, who has sensory needs, really didn’t like using the glue due to it being sticky.

The final activity was a little game (chin chin, involving thumbs), which went a bit better. The person who came last won this time around, which was good. Overall it was a bit of a mixed bag as a session – there were moments where they engaged and others where they didn’t. Next week we’re back to cyanotype, since they enjoyed it so much last time. I’m glad to be reaching the end of these sessions and to move onto something new but I’ve gained so much more than I expected to during this process. I knew I’d benefit from the experience planning and delivering workshops but I’ve also learned I love collaborating with other artists, I’ve learned how to set boundaries with partners and speak up when required and I’ve learned to be less controlling and more responsive to what groups are into. I’m very grateful to have had this opportunity at this stage in my work.